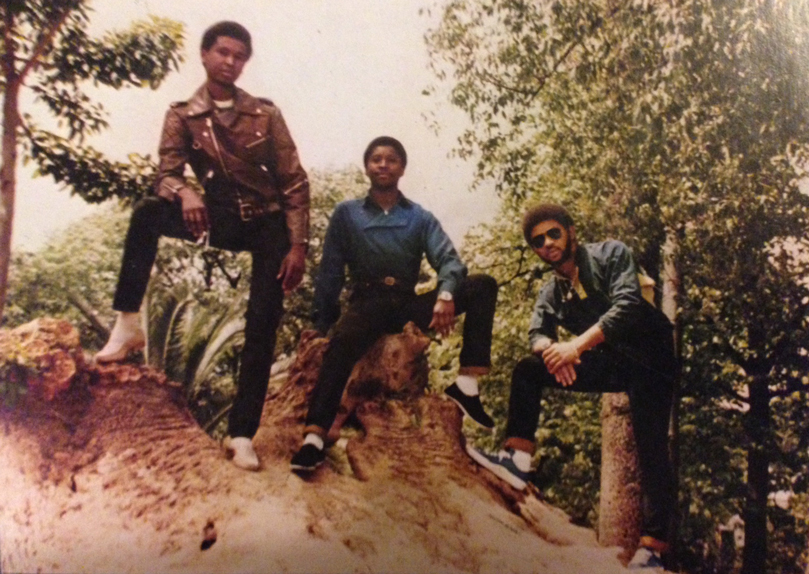 My first introduction to Funaná – but I had no clue at that time – was probably 8 years ago, when I bought a second hand record of Bend’Nobo 83 with the album title Funaná at a local recordshop for 10 euros or something… I was obsessed by a drum-computer intro at one track, and the ridiculous rhythms in other tracks…, and I thought it was some Portugese new wave band or something.., I included it first in this mix Não Wave mit Sauerkraut. Later I made this edit of another track of that album:

It was only two years ago when I fully got to understand what Funaná is by this amazing introduction by Alex Figueira Febri di Funaná, check!!
One year ago I was warming up for Celeste/Mariposa, a dj-duo from Lisbon, specialising in grooves from all the 5 ex-Portuguese Colonies Angola, Cape Verde, Guiné-Bissau, Mozambique and S. Tomé and Príncipe, at Pan-Amafropeans Flight 1212 and they played a super fast energetic funaná set, everybody dancing their pants off, going totally wild! At that party were Judith and Tides (with roots in Mindelo) of Liber Artista, who were so enthusiast they soon decided to bring to duo back to Holland, to Rotterdam, last May and now this coming 20th of November they invite them again! So to get in the mood for Underground Mindelo I recorded this mix, trying to put together a maybe not-so-typical Cabo Verdean compilation with many references to pop, like you can recognise a sort of I’m a Man cover, there are disco/boogie influences, a reggae tune, an afro-beat track, but of course the accordion, the clarinets, the ferrinho and all those crazy organs and synthesisers that sound like spinning around give away it’s as Cabo Verdean as hell.

The Sound of Cabo Verde by Afrobot on Mixcloud

The music of Cabo Verde is a thing on its’ own. Although the islands are situated 700kms west from Senegal, the music is from a different blend of influences, like the population, better comparable to the situation in which Rumba arose. Morna is the oldest music tradition, considered the national music of Cabo Verde, Cesária Évora being the most famous interpretor. Lyrics are usually in Cape Verdean Creole, and instrumentation often includes cavaquinho, clarinet, accordion, violin, piano and guitar. According to the oral tradition, a new musical genre Coladeira appeared in the 1930’s when the composer Anton Tchitch intentionally speeded up the tempo of a morna, making it more party. Little by little, this new musical genre was consolidated, absorbing several musical influences, mostly from Brazilian music and from the island São Vicente this musical genre passed to the other islands. The introduction of the accordion by the Portugese in the beginning of the 20th century, speculatively in order to the population to learn Portuguese musical genres or as a cheap substitute for organs to play religious music, also resulted in something totally different: the creation of another new and genuine music genre – Funaná. The rhythm usually provided by the ferrinho much like the use of washboards in zydeco generating this iron uptempo beat.

In the 70’s, around the independence, these original national genres regained popularity, and the music culture bloomed on the islands and abroad in the large Cabo Verdean communities in Lisbon, Porto, Rotterdam and France. Bands started to replace original instrumentation with electric equivalents: the bass/accompaniment played on the accordion by a bass guitar and an electric guitar, the melody played on the accordion is replaced by a synthesizer. At the same time experimentation with many different influences like pop, rock, funk are hearable on records from that era, but also Haitian artists and bands such as Claudette & Ti Pierre, Tabou Combo, and the Dominican group Exile One were very popular in Africa and highly influential.