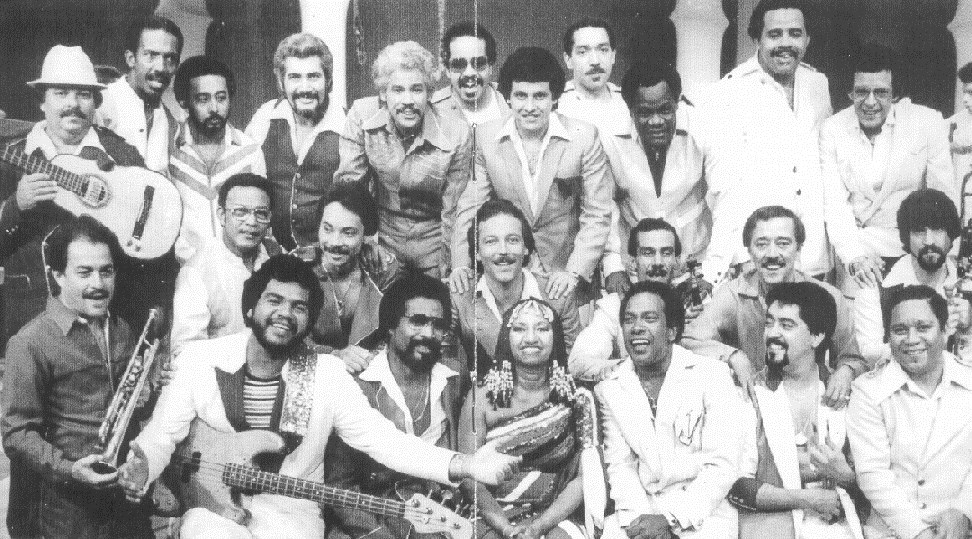 In order to create some insight in what Rumba is, as one of the oldest and main ingredients of Latin music, I decided to handle the text like I handle the records in this mix: I put 35 vinyls in a bit more than half an hour, starting with the Spanish influences dissolving in African percussion… and the same way I took like 1 or 2 sentences of (mainly Wikipedia) texts cutting and pasting them into a weird but kind of fluent story on Latin music.

Rumba is a secular genre of Cuban music involving dance, percussion, and song.
It is based on African music and dance traditions, namely Abakuá and yuka, as well as the Spanish-based coros de clave. African slaves first arrived in Cuba in the 16th century with the early Spanish settlers. People of African descent originally used the word rumba as a synonym for party. Rumba is one of the major “genre complexes”. Vocal improvisation, provocative dancing and polyrhythmic drumming are the key components of all rumba styles. The core instruments of any rumba ensemble are the claves, two sticks that are struck against each other, and the conga drums: quinto (lead drum, highest-pitched), tres dos (middle), and tumba or salidor (lowest-pitched). Other common instruments include the catá or guagua, a wooden cylinder; the palitos, sticks to struck the catá; shakers such as the chekeré and the maracas; scrapers such as the güiro; cow-bells, and cajones, wooden boxes that preceded the congas. Since its early days, the genre’s popularity has been largely confined to Cuba, although its legacy has reached well beyond the island. In the United States it gave its name to the so-called “ballroom rumba” or rhumba, and in Africa soukous is commonly referred to as “Congolese rumba” (despite being actually based on son cubano). Its influence in Spain is testified by rumba flamenca and derivatives such as Catalan rumba.

What Is Rumba by Afrobot on Mixcloud

Mongo Santamaría learned rumba as a kid in the streets of Havana’s Jesús María barrio. He reminisced: “In the neighborhood where I came from we had all kinds of music, mostly from Africa. We did not leave it alone; we changed it our way. Celia Cruz is indisputably the best known and most influential female figure in the history of Cuban music. Using a charanga line-up (flute, string instruments, and rhythm section) as its base, Los Van Van added trombones, and was the first Cuban group to use synthesizers and drum machines. Initially, their sound was a fusion of son montuno, rumba, and North American rock and pop. Later the band incorporated funk, disco, and hip hop, as well as salsa. Descargas (mostly instrumental jam sessions) where jazz-influenced improvisation was developed, were first known as rumbitas in the early 1940s. In 1957, Cachao recorded in the Panart studios his Cuban Jam Sessions in Miniature, short descargas which contrasted with the extended jams in the previous Cuban Jam Session LPs. The album, credited to “Cachao y su ritmo caliente” (Cachao and his hot rhythm), has been described as a “historic recording” with a “classic rhythm section” and “the true salsa musician’s bible on record”. Fania is known for its promotion of what has become known as Salsa music. Hip hop as music and culture formed during the 1970s when block parties became increasingly popular in New York City, particularly among African American youth residing in the Bronx. At block parties DJs played percussive breaks of popular songs using two turntables to extend the breaks, taken from Funk, Soul, Salsa and Disco records for instance. Disco is a genre of dance music containing elements of funk, soul, pop, and salsa that was most popular in the mid to late 1970s, though it has had brief resurgences. Its initial audiences were club-goers from the gay, African American, Italian American, Latino, and psychedelic communities in New York City and Philadelphia during the late 1960s and early 1970s. Most disco songs have a steady four-on-the-floor beat, a quaver or semi-quaver hi-hat pattern with an open hi-hat on the off-beat, and a heavy, syncopated bass line. Other Latin rhythms such as the rhumba, the samba and the cha-cha-cha are also found in disco recordings, and Latin polyrhythms, such as a rhumba beat layered over a merengue, are commonplace. The quaver pattern is often supported by other instruments such as the rhythm guitar and may be implied rather than explicitly present. Calypso is a style of Afro-Caribbean music that originated in Trinidad and Tobago during the early to mid-20th century. Its rhythms can be traced back to West African Kaiso and the arrival of French planters and their slaves from the French Antilles in the 18th century. Soca developed as an offshoot of kaiso/calypso, with influences from cadence, funk and soul. Mambo, big band and porro brass band influences were combined by artists like Lucho Bermúdez to form a refined form of cumbia that soon entered the Golden Age of Cumbia during the 1950s. Discos Fuentes, the largest and most influential record label in the country, was founded during this time. Zouk was a brief experiment: an attempt to develop a proper local music that would lessen or even eradicate the meringue-kadans or compas influence from the French islands. When the MIDI technology came out, Kassav used it fully, creating new sound in both their fast zouk beton and compas. The Creole word zouke, sekwe, or zouke, etc. from the French verb secouer meaning “shake intensely and repeatedly” was used by Haitian artists who toured the French Antilles during the late 1970s and 1980s. The word zouk has, over time, come to mean “party”. Soukous (also known as Lingala or Congolese rumba) is a popular genre of dance music that originated in the Congo basin during the 1940s, strongly influenced by Cuban son. The style gained popularity throughout Africa during the 1960s and ’70s. 1000 Watts is composed by the epiphanic Thierry Boco from Benin, traveling back from Cuba, who shares with us the gold of salsa rhythms. This record was edited on the label “Editions Philomena” in 1980. “Guantanamera” (Spanish: “from Guantánamo, feminine”, thus “she from Guantánamo”) is perhaps the best known Cuban song and that country’s most noted patriotic song. La Familia Sen – “Angelo” – hailing from Trinidad, the genre is called Parang, it is a music that is made around Christmas only. This record is a particularly heavy 140 bpm affair with loud claves, frantic driving mariachi guitars and the melancholic voices of the Sen family wondering about their lost brother/son.