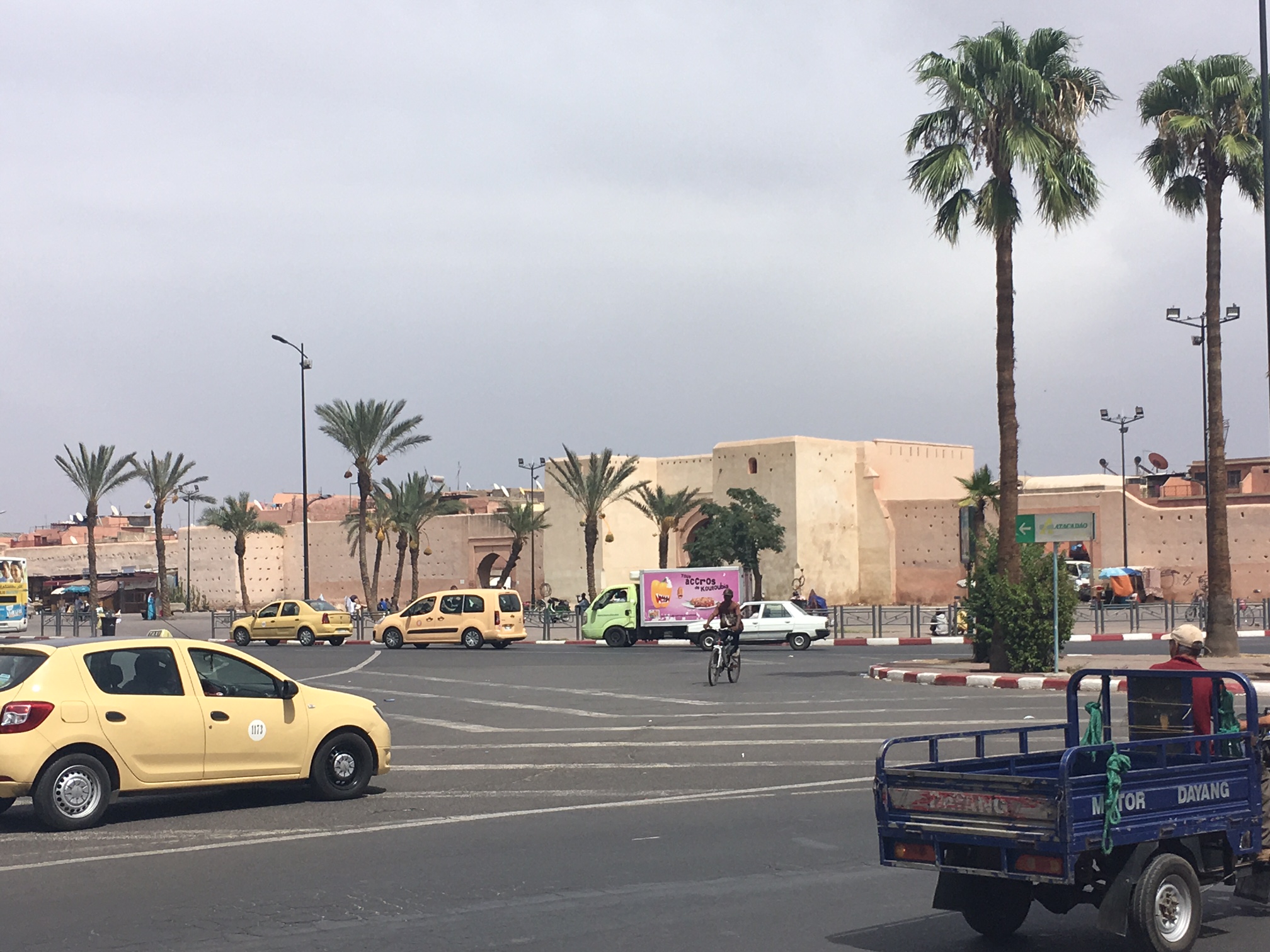 Last weekend of August I was invited to play at Atlas Electronic, a small scale electronic music festival that was happening in Villa Janna in Marrakesh for the second time. The location (approx. 10 km north from the city center) is a beautiful garden with an amphitheatre and a pool and the villa, all constructed from local (clay) materials. The festival was magical, and what makes it special is the big number of local bands that are performing, mostly Gnawa music. 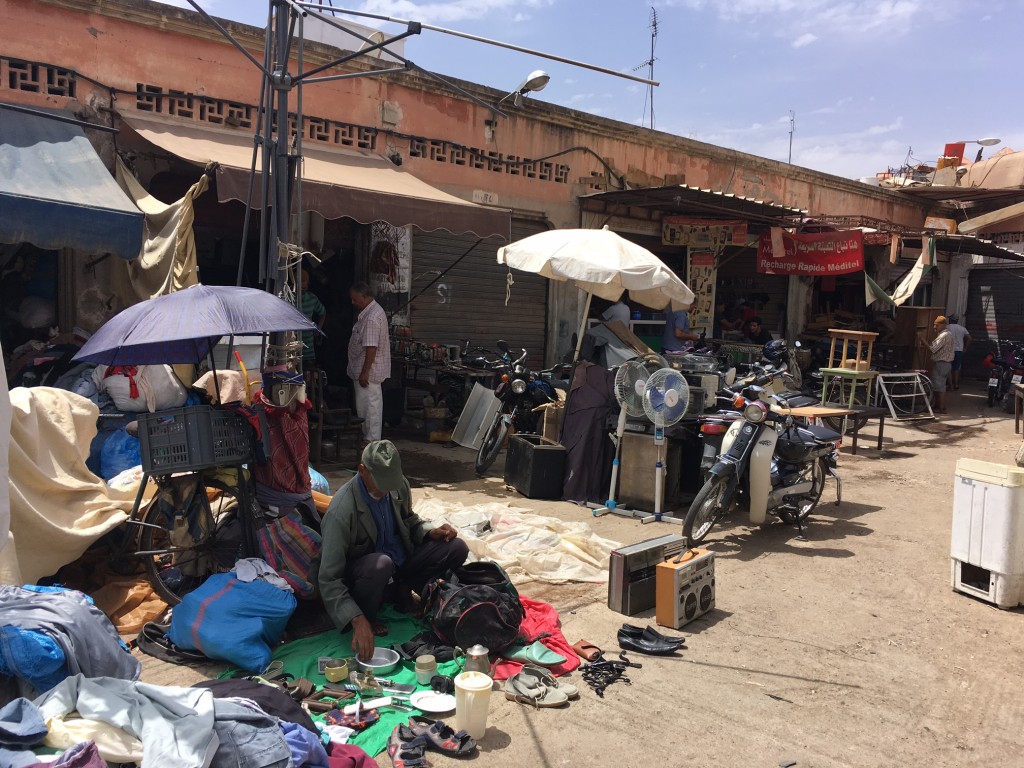 After a welcoming dinner party at the leader of the band Groupe Bana’s home, the next morning, the first day in Marrakesh I went for some record digging around Bab Khemis, a big flea market on a rough terrain and partly in a park and all 7″‘s I saw were melted, made unplayable by the sun (temperature was 42°C). But in Souk El Khemis I was more lucky in a small antique shop that had a little pile of 7″‘s. Most of the discs were in a terrible condition, scratched, dusty and I felt the desert sand crackle when taking the vinyls out of their cardboard sleeves (without inner sleeves), so I was mostly concentrating on finding the cleanest ones that looked interesting. All records were Moroccan, labels like Ifriquiaphone, Orikaphone, Disques Gam, Boussiphone, Kawakibphone, Koutoubiaphone, all from the 60’s and 70’s, although most pieces are undated, that’s the era in which these 7″ labels were active in Casablanca. I paid 30 Dirham each (which is approx. E3,-).

The 45’s in this mix are wide-ranging in terms of styles and regions, but they share a lot typical Moroccan sounds. The scales and – more importantly – the rhythms are similar: complex polyrhythms and syncopated metal sounds of the qraqeb and hand-clapping are commonly used and another uniquely Moroccan trait is the use of the gunbri, a stringed lute that is native to Morocco that produces those bass lines. Most of the tracks are quite trancy and repetition of the flutes and lyrics is hypnotic, the songs are quite long, sometimes up to 6 minutes on a 45. The ultimate score was are quite decent copy of this 7″ by Faddoul which is sold for prices up to E350,- (it’s the b-side funky rock track in the mix). Another great find is a kind of post punk with a great female vocal (on 1h02min in the mix, icon pic of the mix). The second track of the mix I found about a year ago in Paris, the others are all Marrakesh finds. Even after I tried to clean the loudest clicks and pops I would call the average sound quality of this mix: lo-fi and super raw, I hope you can enjoy it. 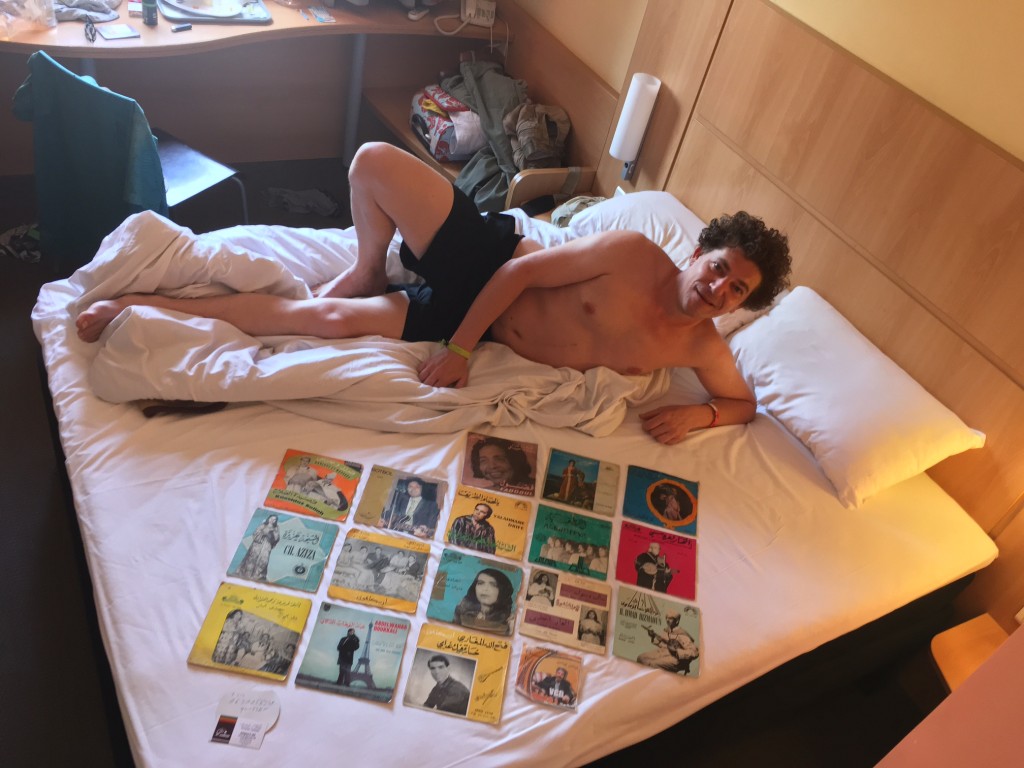 Thanks Atlas Electronic, I had an amazing trip, it was so much fun meeting new people and seeing many friends at the festival, the vibe was ultimate relaxed, the music extraordinary!