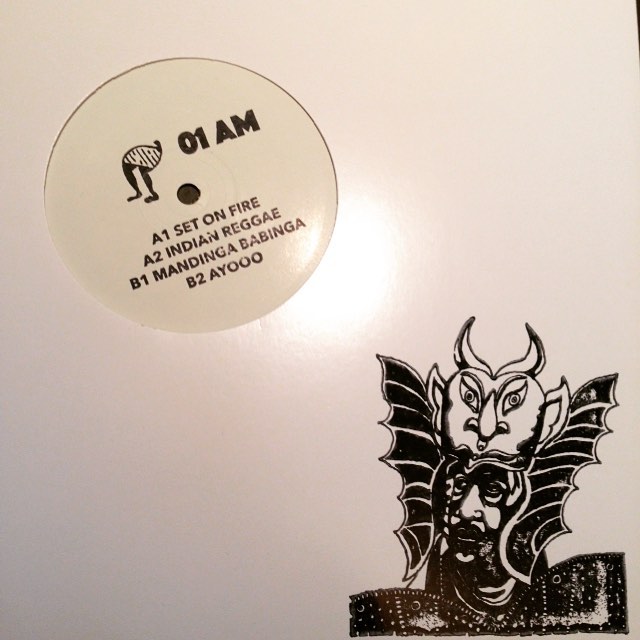 01AM is the first release of a new record label related to this blog and it will be available in shops this / or next week. On this first release I decided to compile some edits of myself, but AM won’t be a label strictly for edits, I will also bring out new productions of other artists (in any kind of genre…), the future of the label is completely open.

So you’ll find 4 edits on this first release and I’m aware of the fact that edits – of already existing (mostly older) tracks – fall within a kind of grey zone of music production. First of all the editor is of course not the owner of the intellectual property, and personally I see it more as an extension of my digging and dj-ing. In my search for new danceable records I encounter a lot of tracks with some potential, but that go ‘wrong’ at some moment (imo), so that’s when I get the urge to do something about it… Most of the time I don’t touch records that I like from the beginning till the end, why should I, the only reason could be to extent a track, if it’s too short, but I rather try to edit records that could use a rework, which I wouldn’t play otherwise.

I will shortly explain what I did for each edit.., by chance each track had a different reason for reworking it:

Set On Fire, the first track (not on Youtube and not on Soundcloud) is actually already a pretty good Greek electro-pop song, which I thought I could improve by re-arranging it drastically: originally a 7 minutes-song starting with the lyrics for 3:30 mins. followed by an epic instrumental end of 3:30 mins. was changed in 2 mins. of singing, 2:15 mins. instrumental, 1:45 mins. lyrics again and one-and-a-half minute final instrumental break – which makes the total running time half a minute longer than the original and gives it a different flow.

Indian Reggae is a whole different story: it’s a completely cut up Bollywood track, using only the freaky instrumental parts, looping them and cutting out all lyrics, this track contains over 150 cuts.

Mandinga Babinga is an African percussion track, and in the original there is this amazing weird acid synth line coming in only at the last one-and-a-half minute, and I wanted so much more of that sound, so in my re-edit the synth line comes in at 2:00 mins. and now you can enjoy it for more than 4 minutes.

Ayooo, last but not least is one of the first afro edits I ever made (7 years ago) and opposite to the previous track, here it’s the intro with the flanged drums that took my attention… so I made the intro start over and over again.., one-and-a-half minute stretched till it almost tripled in duration.

01AM is a vinyl only release with hand stamped artwork by Frank Koedood and is available in the following shops (ao):