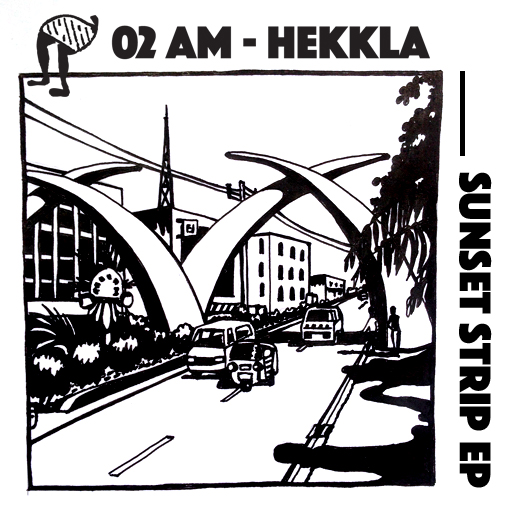 My first encounter with Hekkla‘s music was about a year ago, when I prepared a Red Light Radio show with my friend Axm3d, who came up with this track called Sunset Strip. I immediately liked the fuzzy compression and the fresh unconventional build up of the track and started following Hekkla on Soundcloud. When – in January this year – Thump asked me to name a young upcoming producer from the Netherlands I chose Hekkla and shortly after Axm3d had contact with Tim Schellekens and one or two weeks later we were meeting him at his place in Eindhoven.

We listened to 20 or 30 of Tim’s productions which varied from hard techno to ambient to funky vocal house, we went quite quickly through them, provided with short remarks and hard laughs by Tim, sometimes almost apologising ‘maybe the next track is some more interesting’, but Axm3d and me were super enthusiast and we went home with 12 tracks that we liked to finally compile 4 tracks for 02AM: Hekkla’s Sunset Strip EP.

2 Weeks ago The Ransom Note premiered Memories of Tau Ceti:

On Thursday Hekkla featured in my monthly show and we had a couple of beers during a pre-release party that evening at Red Light Records:

In the meanwhile the Sunset Strip EP is available at these stores among others:

So get your copy now!