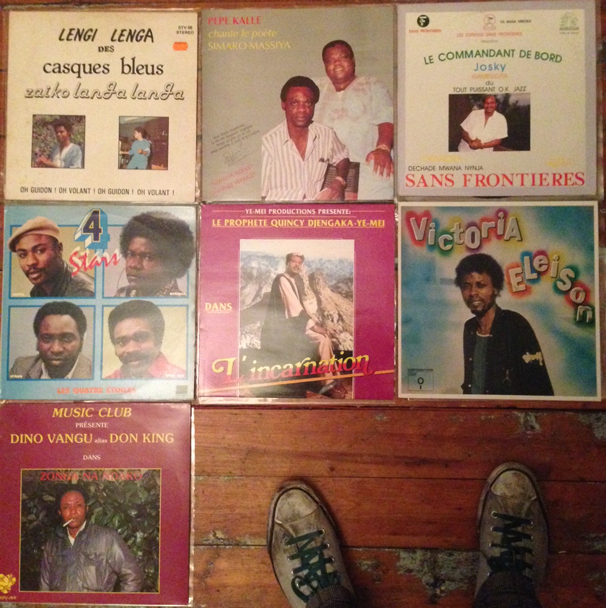 Last summer Nikolai, a good friend of mine – we’re regularly dj-ing and partying together in Amsterdam – went on holiday to Japan, and of course he was going for some digging over there, so I asked him to bring me some good records if he would find some double copies for a fair price… After his trip I met him again at the Dekmantel Festival and in the morning I crashed at his and his girlfriends’ place, and during breakfast (slightly hung-over at 2PM) he surprised me big time with a little pile of Japanese import: 7 lp’s full of soukous, straight from Japan!
So in stead of some funky jazz fusion or experimental electronics, or some crazy 80’s wave-pop from Japan, he b(r)ought me Congolese Rumba from the late 80’s.., and we listened to some songs, making fun about a title like ‘Diarrhee Verbale’, probably my enthusiasm wasn’t overwhelming, but the energy level was low anyhow after 14 hours of Dekmantel euphoria.

I took the records home to listen to them carefully, and usually soukous is the kind of Afro I leave alone in records shops, I rather go for West African music, or South African.., these soukous lp’s are often too smoothly produced, are hard to mix in – they’re going faster all of the time, as they’re accelerating – and I could never judge the quality of recorded soukous… they all sound alike to the untrained ear. In contrast to live soukous music: that’s amazing, super uplifting, I had the best experience at a Pantropical night in Worm where I saw Color Rumba from Brussels.
By chance I only bought 2 soukous albums in March this year, which I immediately liked, which I included in this mix after each other (from 17 till 30 minutes).

Congolese Rumba by Afrobot on Mixcloud

One night I really got in the mood for soukous, I listened to the individual lp’s a couple of times before, but that night I kind of started ‘to feel’ some tracks, and I realised Nikolai did quite a good job, as on 5 of the records there was at least 1 good track, or an interesting part of a track. Mostly the songs or parts in which the band lingers in a groove that gets hypnotic, it seems as if time and space disappear: moments in which the band loses itself, the bandleader loses control and the guitars take over, and the beat goes more freaky, that’s when the music takes you over…

After some research I found out in the 80’s soukous was already widely spread through central Africa and to Paris and London, both by popularity and musicians leaving the country for political reasons. The records in this selection are the more faster paced soukous inspired by rock n roll, from a younger generation Congolese musicians that looked for ways to reduce that original (slower) Rumba influence. For the albums ‘from the late 1980s and 1990s, Parisian studios were used by many soukous stars, and the music became heavily reliant on synthesizers and other electronic instruments.’ Soukous is a derivative of the French word secouer – which means SHAKE that booty!