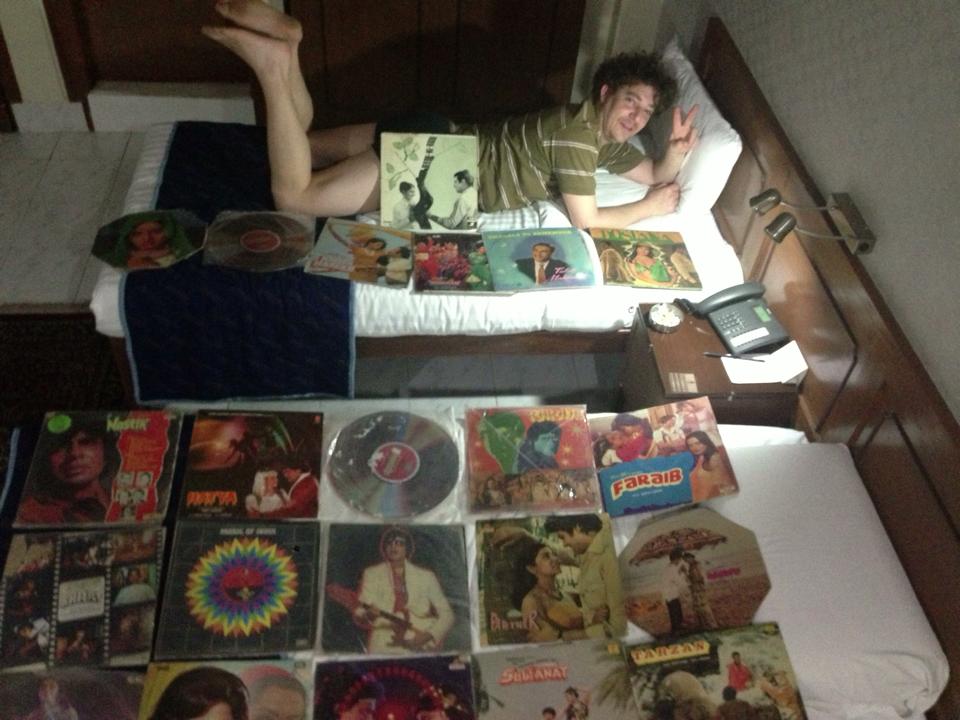 Finally I recorded a Bollywood mix of the most interesting finds from India. It took me a year to sort out more than a hundred records, because that Bollywood sound can get so annoying with the screaming vocals on top. So often after two or three hours of skipping through those records I couldn’t hear it anymore. My theory is that possibly those vocals are produced so loud in order to keep them hearable – and understandable – in the Indian city environments where most televisions are located in semi-public spaces like bars, shops and restaurants. Half out on the street the lyrics of the songs – that are important to the Indians, as they’re telling stories – have to compete with the city sounds, and in India car drivers use their claxon more often than their brake.
What interests me most of those songs are the intros, the synthetic sound effects, the bleeps and the percussion breaks in between the lyrics, and an average Bollywood track – of 5 to 9 minutes – has like 5 breaks or twists in it… so lots to discover!

About one and a half year ago I joined a study trip to India. As the study part was only 8 days and me and my friend Alonso, with whom I travelled together, decided to stay for 3 weeks, I prepared some Bollywood digging operations. Best thing in my preparation was finding the website Quikr, where I found numerous telephone numbers of people that offer large quantities of Bollywood records.

Once in India we bought a mobile phone, and one of the first dealers I called, invited us to come over, like 35 kilometers outside the city center of Mumbai. On that Sunday afternoon we took a cab to bring us there… which was already an amazing experience as we drove through hours of Mumbai, seeing endless slums, some parts where skylines were arising, we saw the Bollywood Studios road exit, more slums… and when we approached our destination, some dodgy neighbourhood – with illegal bars and brothles – we discovered how addresses are found in India. The cabdriver first drove to the neighbourhood (Borivali East)… at the moment he thought we draw near, he called our dealer, who explained it’s near some cinema, and by asking people we arrived near the cinema, another call, our dealer said it’s a few blocks from the cinema, deeper into the slum, and so we went.., when we were near the street, our driver started to ask people on the street for the guys’ name, until somebody knew him… After 2 or 3 hours we reached some storage box and met our dealer. 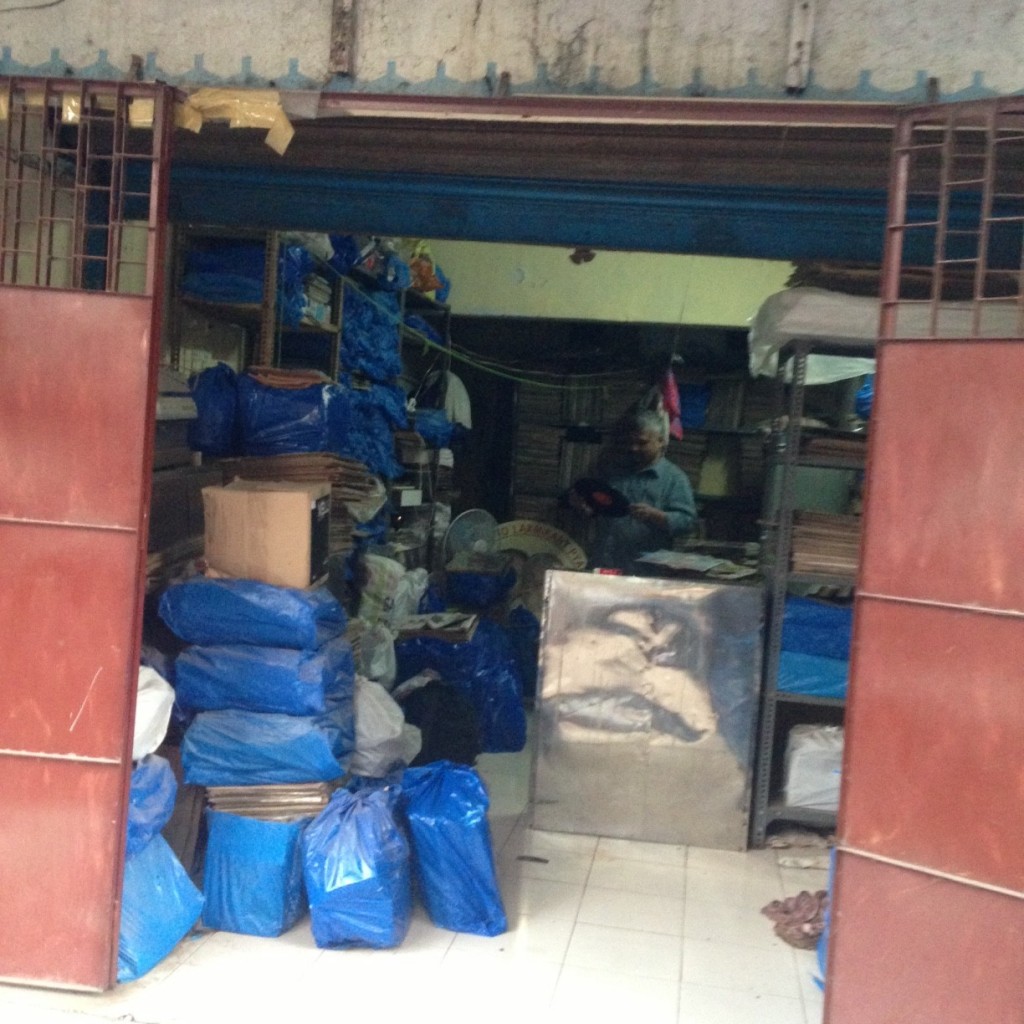 This dealer knew exactly what to expect, offered us a chai tea, turned on his sound system – that was pretty good – and started playing all the nice synth- and percussion breaks of the records from my little wish list… I stayed there for 3 hours, immediately had my whish list complete – of most of those records he had several copies – and he played all kinds of stuff I didn’t know jet… I made pictures of sleeves, tried to memorise names of producers and spent like a hundred Euros on 16 records… At the end of the listening session I noticed a whole group of local guys gathered in front of the place, listening, singing along and dancing to the music. 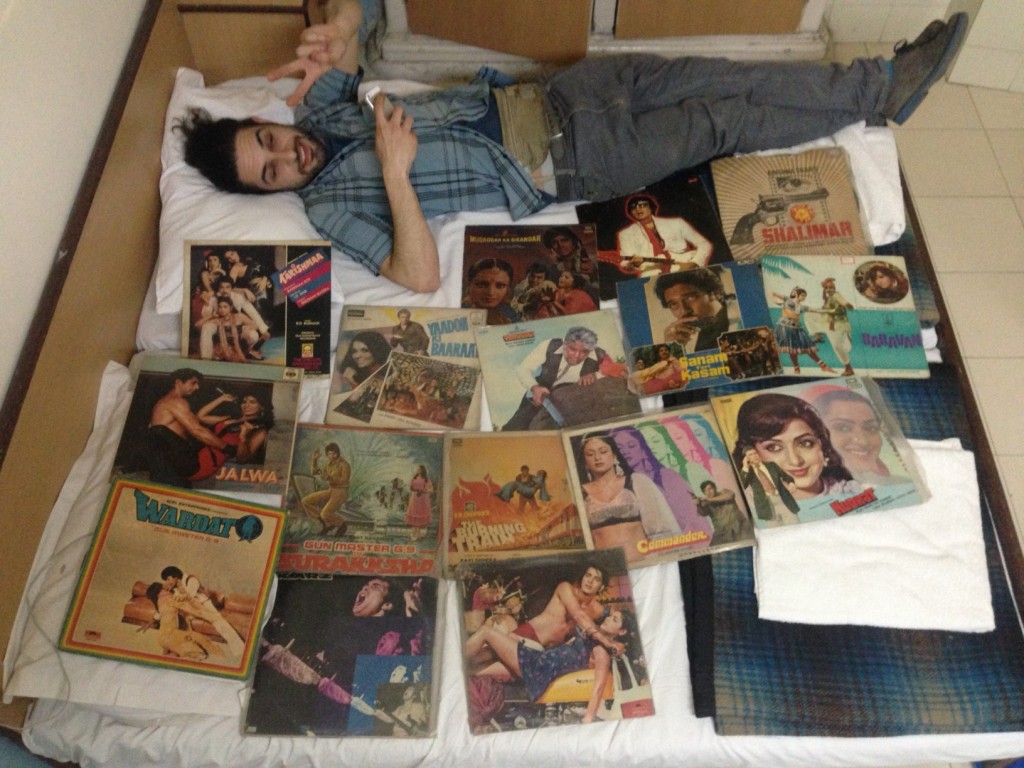 Alonso with the score of the first day

Next day we went to Chor Bazaar, a tip by Edo ‘Bombay Connection‘, where we found more records… One shop had a possibility to listen, at other shops we had to guess and gamble… average price one or two Euros… lots of dust here, damaged records, a variety of rare fungi and sleeves gnawed by rats. 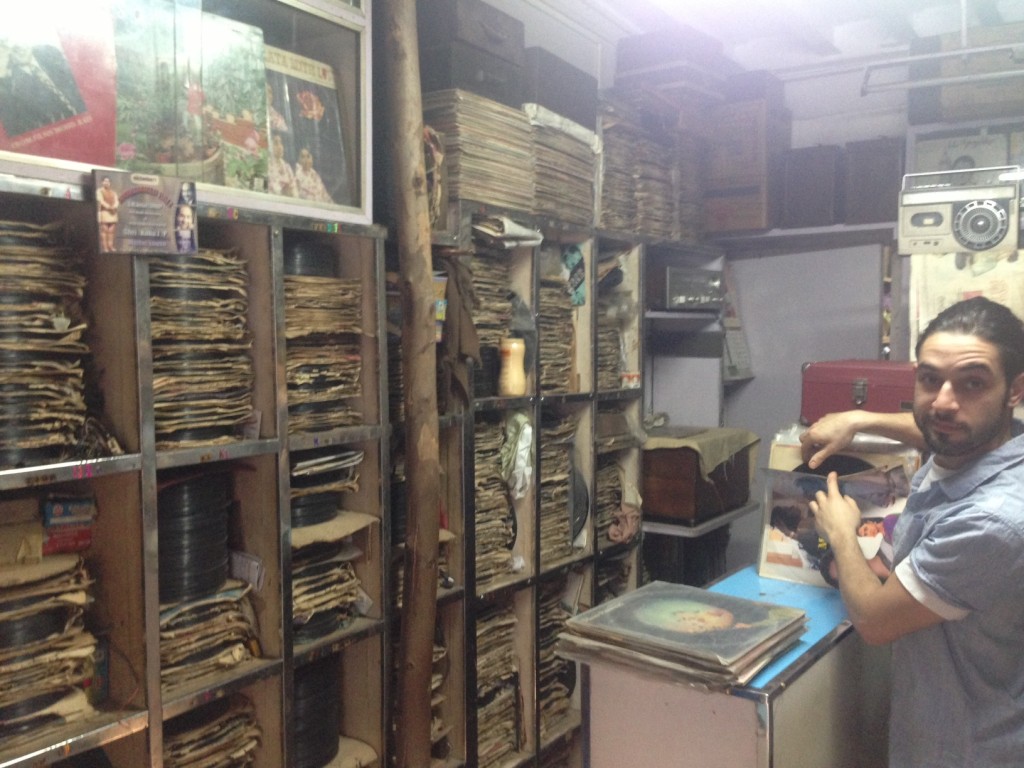 A few days later we visited another contact from Quickr in Ahmedabad, province Gujarat, one day travel up North from Mumbai. He invited us to his nice – trim – apartment to meet his mother and sister and we were welcomed with a delicious mango lassi and then after a shy conversation we moved two blocks to his office. This space was full of steel cabinets, full of records, perfectly ordered by genre and alphabet. Although all sleeves were tidy packed in plastic covers, the records were not all in such a great condition, but still we left with about 35 records including the rare Night in London.

We decided we had enough records. We already stashed our first scores in a hotel in Mumbai – travelling around with heavy records is not so practical – and we added the Ahmedabad records one week later, and we really decided we didn’t need more kilograms – more trouble – at the gate at the airport. Before flying to Kerala in the south, we headed one more time to Chor Bazaar to find some nice souvenirs and gifts, but we happened to walk straight into boxes full of Bollywood records – in quite good condition – that were sold on the street for 50 cents each… so we ended up buying another 50 records, and buying cheap bags, and rolls of packaging tape to have some possibilities at the gate.
In Kerala we chilled out and did an amazing trip into the jungle to a little production town of bells. When back in Mumbai we picked up all records at the hotel and after a big performance that delayed the check in procedure we managed to get the records aboard – for a little extra charge – and at home now, out of that Curver crate full of Bollywood I keep on discovering nice tracks and breaks. 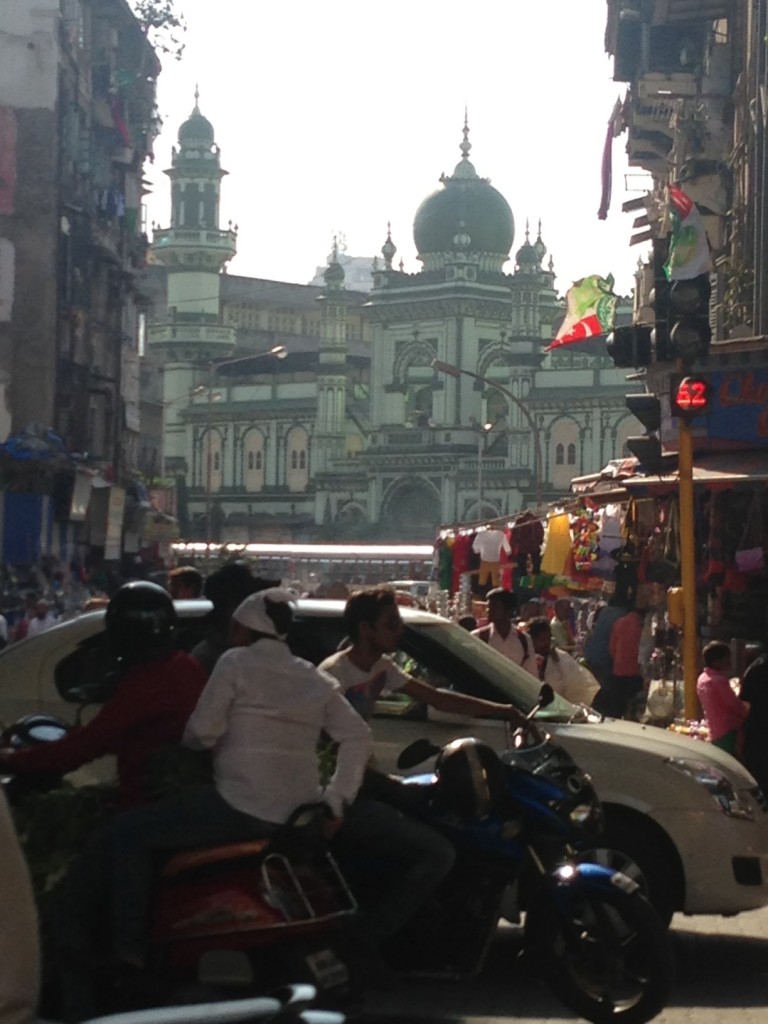