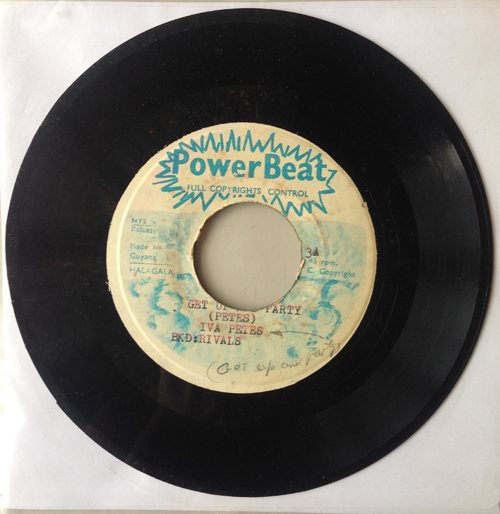 While digging for African singles on discogs, I stumbled upon a digger who lives in Amsterdam, and because I had no clue what’s on the 7″‘s he offered – that looked super interesting – I asked him if I could come over to his place to listen to them, and he was so kind to invite me. So I spend an afternoon going through boxes full of African 7″‘s, bought a whole bunch of them, but I also discovered a weird 7″ from Guyana I couldn’t afford (listed for E1000,-)… As we were talking and listening to the crackling copy he proposed I could borrow the piece, to try to clean it (digitally) and edit it, and so I gave it a try.

What we see on the label is HALAGALA and ‘made in Guyana’, what means this 7″ is released by Terry Nelson-Fraser, a musician who recorded on the UK label Halagala in the 60’s and remigrated back to his homeland Gayana in 1970 and started a recording studio and a pressing plant under that same name Halagala. About the artist Iva Petes and the backing band Rivals I can’t find any information, I guess it’s this band, but I’m not sure. The sound of the song vaguely reminds me of Eddy Grant, who is from Guyana as well. I discovered the succes of the Halagala label was very disappointing as Terry Nelson ‘experienced problems with the gatekeepers at local radio stations. The primary complaint was about the quality of the materials he used in his products. Economic conditions, including the small size of the domestic record-buying market, caused Nelson to recycle the vinyl used in the pressing of records’ I read in this book. That explains all about the bad quality of this Power Beat 7″.

On the other side this reggae tune:

And last but not least, this is another 7″ from the same label, by Terry Nelson himself: